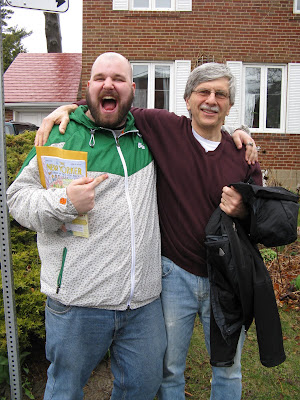 First things first, congratulations to the winner of our first annual "Why Mike Sucks..." essay contest: Rick Haliechuk. Young Mr. Haliechuk won the opportunity to spend the day with the editor of this fair blog. As you can see from the photo above, fun was had be all that day.

Secondly, yes we were back from China... but now we are on the road again.

and if you come out to Coachella you can hang out with my boy Paul McCartney too.

Thirdly, our good friends at Mishka have just opened a store in Brooklyn and you can buy this shirt there:

arguably the coolest looking shirt ever.

Fourthly, I was sorting through my computer and found this stuff. It is a bunch of list I did for various places for the end of last year:
Top Ten Things I didn't Do In 2009 That I Should Have Done...
10) Try "Drank"
9) See Dark Knight in the Theatre
8) Hear "Chinese Democracy"
7) Play "Grand Theft Auto IV"
6) Lose money in the stock market
5) Get a pizza from that new place on Ossington
4) Watch Rage Against The Machine
3) Start watching Saturday Night Live again
2) Fall in love with / totally hate (insert band name here)
1)Vote for Obama (I'm Canadian)

10) Winding up in a mental hospital in Denmark
9) Becoming a sex symbol for bears
8) The decline in the morality of certain members Fucked Up
7) Standing on stage with my penis tucked between my legs in front of 10,000 people
6) Winding up in a hospital in Calgary with half a pint glass stuck in my head.
5) Doing a photo shoot with Terry Richardson.
4) Getting a bill for $5000 from MTV after our live set.
3) Accidentally shaving my beard off the night before the NME cover shoot.
2) Moby claiming he saw us with Youth Of Today six years ago (never happened)
1) Finding out I'm going to be a dad.


Mind Eraser - Conscious/ Unconscious
The prospect of finding a way to make a great ten minute power violence song is daunting enough let alone doing it twice on the same record but leave it to Mind Eraser (the reigning kings of nu-power violence tm) found away. Ladies and Gentlemen, we have entered the mannerist stage of power violence.

Nodzzz - st
Once in a blue moon you find a record that makes you wish you were still in highschool just so you could have the pleasure of sticking it on a mixtape for that special someone; this is that record. Sunny punky-pop that manages be witty without coming off smug and naive. without being contrived.

Lil Wayne - Carter III
All the hype placed on this record, which will no doubt turn into a backlash at any moment, will not detract from the fact that this is one of the most enjoyable records of the year. Sure it has some problems (Busta Rhymes' verse, too many RnB songs, etc.) but you can't argue with that flow.... and how great is Fabulous' verse?

Cold World - Dedicated To The Babies That Came Feet First
Nothing, and I mean nothing, will ever be able to cleanse the negative connotations that surround the mix of rap and aggressive music but that isn't Cold Worlds fault and that isn't going to stop them from trying to take a different approach to this highly toxic mixture. While it is debatable whether or not this is the truly great record they are destined to make, it is a major step towards it.

Vogue
I have only heard this record once at this point, on the first day of this seemingly unending European tour that I'm currently on, but I am so sure that this is one the best thing I have heard this year that I am willing to put it on this list. Hardcore by kids but for adults.

Fifthly, my wife and I went to pre-natal classes and it was the first time in ages that I hung out with normal people in a long time and now I am finding myself sharing the opinion of the Vivian Girls on normals. But I must stress not their opinion on TGI Fridays which I finally was taken to by the young men in the Bronx and it rules so hard.

Finally, now that I am on tour again I will be posting on the reg again so check often.
Posted by Pink Eye at 4:50 PM

So will the pre-natal classes make it into your list of most shocking moments 2009?


"things that will change most about having a kid: missing out on golf weekends"

"things that will change most about having a kid: missing out on golf weekends"

That only counts for the mothers. :-P

How nice for you and the Vivian Girls that you rarely deign to leave the lofty heights of your punk rock ivory tower to rub elbows with the normal secular world!

but that's such an incredibly dumb and cliched sentiment.

Cold World don't get enough love due to the rapcore stigma. The hiphop aspect of their music has more to do with the overall texture and not really the song themselves which I think makes them easier to like. Great shit.

well no, that was actually a quote that came out of the group of men d was split into for one part of the day!

God dammit, Damian. I love your posts... and I think I love you... in a totally hetero, non-bear way.

Hey you definitely get this shit all the time and probably don't read these comments - but I'm probably going to miss Edmonton and that's killing me. Are you cats hitting Ontario (North Bay or area) this summer?

as an addendum, in case it wasnt obvious enough, neither Damian nor I play golf. ever. ha

New pizza place on Ossington? Where?

Next time you're in London, get yourself to the Kings Arms in Soho and you'll never have to buy a beer again.

Do bears not know Damian is straight edge?

Do you really think they care? I mean...it's not like all female George Michaels fans jumped ship on the day he was caught in a toilet. ;-)

There are always people that think they got a chance no matter if the other person is straight or gay. Women always tried to hit on gay guys....and the gay guys have seen too many "straight" married dudes cruising the local gay cruising areas. So they always hope one way or another.

Who cares as long as no harm is done?

Of course not, I only mentioned it when the one right above said he'd never have to buy another beer again.

Yes, the bears love you.

We also love your child, but not in a sexy way (congrats, Daddy!).

There are female George Michael fan? I've never met one...

But, then, I know a woman who works in a women's shelter whose fave band is Big Black. Life is rife with ironies...