It's beginning to feel a lot like Edge day...

Good news! Edge Day is less then five months away. And in honor of this this here is a short documentary on one of the greateast sXe bands ever: Judge


And remember you only have a few short months left to decide what you are going to dress up as and to buy those last minute edge day gifts...
and as an early edge day gift, here are the top three straight edge records according to the us here at VoD: 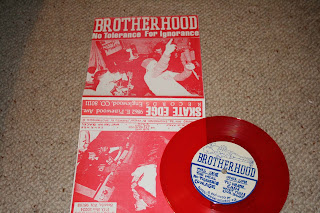 1: Brotherhood: No Tolerance For Ignorance
Before Gregg Anderson of Sunn 0))) discovered pot and boring music and before William Goldsmith discovered terrible college rock in Sunny Day Real Estate and the Foo Fighters, they were the axe-man in the greatest and bass-tard in the Greatest Edge band ever. Cool harsh vocals and illest gang vocal part ever: "More then music... IT'S A WAY OF LIFE!!!"

2: Turning Point: s/t
Once again the harsh vocals make the record. As a young edge kid nothing hit closer to home then the lyrics to few and the proud... fuck it as a 29 year old edge man they still hit:
Because I'm straight It's a trend to you How could that be When we number so few You've always criticized us Saying we do wrong You just feel threatened Cause you don't belong There's nothing to fear In our existence I'm reaching out to you You keep your distance... then they start to suck.

3: Confront: s/t: This record makes it a gruff vocals trifecta. Harsh, fast and Clevo... the three greatest words in the english language. So what if they became the OLC... I mean Crime Ridden Society is a killer record as well.
Posted by Pink Eye at 7:37 PM

Holy make-up, batman. Does the dude with the EARTH CRISIS tattoo have plugged eye brows ... or are they tattooed aswell???


Have you seen the pic of Earth Crisis face with Terror and Blacklisted over in Europe? He looks so sad.

That dude is a lifer... whether he lakes it or not... also see Hatebreed mustache.

Hatebreed mustache dude is in a whole other category cause that dude is a legit Nazi criminal.

When I told Timmy from Unit Pride that he said I was an idiot but that is some real talk.

There's almost no point comparing new turning point and old turning point, and it's interesting how their sound matured pretty swiftly given how young those guys were. The last songs they did for the No Escape split bear little to no resemblance to the Hi Impact ep. Both are great though. When I was like 12, I bought the first TP ep and the Supertouch record at Vintage Vinyl. The interim singer of Up Front (Roger, I believe), sold them to me.